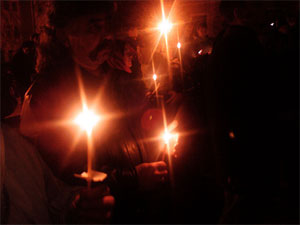 A touching scene from a television documentary this evening: a family celebrates orthodox Easter in procession with candles. They stop at intervals, shielding the candles from wind, as the priest intones the ritual. The child’s face shows boredom but he’s comfortable in the traditional environment – the bosom of a hundred generations of his family.

It occurs to me that the normal human condition is to be in a place your family have lived for hundreds or even thousands of years, with a religion, beliefs, and way of life the same as that of all one’s neighbours and ancestors since anyone can remember.

Lately urbanisation and modernisation have changed some of this for many people, but the thing which struck me about the family on television was that although they’d moved to Australia and had, on the surface, adopted a standard western lifestyle, much of the essence of their lives had continues untouched. For many reasons I suspect that this may be nearly the last generation for which this is true.

But it’s not true for me. Although my upbringing is Anglo-Saxon Protestant, that describes more the absence of a cuisine than the presence of a culture.

This is anodyne but it has its advantages. It’s compassionate humanist, atheist, tolerant, and respectful of both arts and science. It lacks the baggage, hatreds, and conditioned prejudices ingrained by centuries of warfare and cruelty, although it inherits the blindness and condescension of colonialism. I’m grateful for what my parents didn’t give me, and the choices that makes available. If there’s something I envy, though, it’s the thing my ancestors gave up when they came to this country – deep roots in the land.

Perhaps that’s why they destroyed the people they found here and their sixty thousand year connection. Perhaps that’s why immigrant and colonial nations of the west have used up the environment without thought for past or future.

Umberto Eco noticed that Americans had a fetish for the authentic, and a tendency to make everything they touched plastic by removing its context. But physical authenticity and the meaning given by tradition and familial connection are only outward appearance, the cypher for the quality that has been lost. We search for integrity of relationship with one another and with the world. That doesn’t mean a moral relationship exactly, although I think that helps, but it means a relationship which is unconditional.

Conditional relationships are transactions of convenience and of barter. For as long as it’s worth my while. I think people yearn for something else: an interaction unbounded by “what have you done for me lately.” The land and air and water and people you couldn’t choose or give up. There’s a magic in that which we can perhaps find again.

Australian aboriginal culture is perhaps the most ancient on the planet, extending at least 45 thousand years. You can see how seriously they took this idea by the fact that tribal elders know the kinship group and moiety of every tribe member alive and dead for many years. An urban westerner might just about know which direction is north, but the makers of Stonehenge wanted to know the orbit of Venus every day of the year and exactly where the first ray of the midwinter sun would strike the earth.

If our modern culture seems to lack direction I think it’s because it cannot orient itself.

Don’t forget Carnival of the Liberals #22 is here next. See the previous post for details.