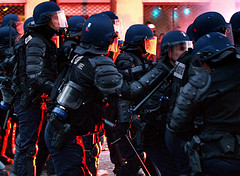 In the 1980s some environmental activists, including Dave Foreman, in the western part of the United States began consider using direct action and even sabotage. They were inspired by a work of fiction: “The Monkey Wrench Gang“ by Edward Abbey, to found a group which called itself Earth First!. They blockaded logging operations and devised the tactic of tree sitting.

By the end of that decade some Earth First! members were moving from peaceful direct action towards what could be called covert guerilla style sabotage actions. Others saw the organisation being accepted as a mainstream lobby group which maintained a distance from “terrorist” activities. The Earth First! journal had begun to provide information on tree spiking and other ecotage, and in response a prominent member, Judi Bari, succeeded in having two of the most influential chapters of Earth First! renounce tactics involving violence. The more militant members formed an offshoot called Earth Liberation Front.

In early 1990 Judi Bari was the main subject of a concerted attempt to discredit Earth First! orchestrated by PR firm Hill & Knowlton at the behest of the Pacific Lumber Company. Fake flyers and press releases were distributed calling for violence. Bari had been constantly followed by the FBI, and she had received death threats which the police refused to take seriously. Then on May 24 a motion triggered pipe bomb exploded beneath the driver’s seat of her car, injuring Earth First! organiser Darryl Cherney and nearly killing Bari.

The FBI immediately decided that the bomb was hers and had exploded accidentally. For several months the police released reports describing an open and shut case against Bari, but the District Attorney did not file charges because of lack of evidence. The FBI nevertheless refused Bari’s requests to seek the actual culprit. A year later, Bari and Cherney filed a federal civil rights suit claiming that the FBI and police officers attempted to frame them and to falsely paint them as violent terrorists. Five years after Judi Bari died of cancer in 1997, a federal trial jury found four FBI agents and three Oakland Police officers liable for a total of $4.4 million damages to Bari’s estate and to Cherney. The damages were for violations of First Amendment rights to freedom of speech (80% of the damages) and for false arrest and unlawful search and seizure in violation of Fourth Amendment rights (20% of damages).

Meanwhile, a group calling itself the Evan Mecham Eco-Terrorist International Conspiracy (EMETIC), sabotaged a ski lift in Arizona. The members were Mark Davis, Margaret Millet, and Marc Baker. The FBI mounted operation THERMICON and was able to recruit a friend of the three as an informant and infiltrate an agent, Michael Fain, as a member of the group. After two years of planning, the group decided to topple a transmission tower in the Arizona desert which carried power from the Palo Verde nuclear plant. There are claims that the idea was instigated by the FBI agent provocateur, and that the FBI even offered to obtain explosives for the purpose. There is no doubt that the FBI was keen [pdf, large] to implicate Earth First! founder Dave Foreman in the group’s activity, in spite of the fact that his involvement was limited to a passing acquaintance with the group’s members.

On 30 May 1989 the four EMETIC members were arrested in posession of cutting equipment whilst attempting to sever the supports of a transmission tower. They were sentenced in 1991 to between 30 days and 6 years in prison. Dave Foreman’s case was separated and he was finally convicted in 1996 of a misdemeanor and suffered a small fine.

The United States is not averse to using media manipulation, infiltration, false testimony, and even violence against domestic groups which it considers a threat. The list of known and suspected instances is surprisingly long, ranging from the flase media claim that Jean Seberg was pregnant by a Black Panther member, to the provocation of gang warfare.

All this was before the “war on terror” provided official sanction for extra legal techniques, and before the administration and the secret police had such a stake in encouraging the public to believe in the existence of an ongoing and serious threat by terrorist groups. The line between infiltration and entrapment was always thin. Fake terror incidents have always been a tool of government, but recently its use has reached a crescendo.

The danger is that we reach the Orwellian state of permanent fake war. Perhaps we already have.

This entry was posted in environment, law, society. Bookmark the permalink.