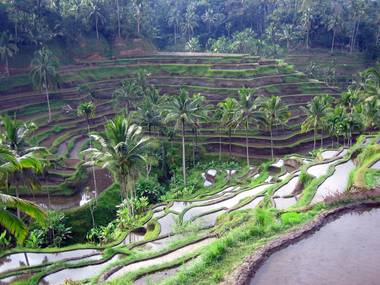 Australia is facing terrible water shortages on a continuing basis, due to climate change. We’re running out of fossil fuel, so we probably won’t be able to continue to make fertilisers in the same way, or to make heavy use of transport and refrigeration to ship food around the country out of season. This is not a problem confined to this dry continent, however. The World faces similar water shortages. Similarly it’s been obvious for several years that oil’s days of plenty have passed.

So I’ve been wondering how well my region of the world (Tasmania) would cope if it had to be self sufficient in food grown locally by organic means?

Cuba faced at least the oil problem and has managed to become largely self-sufficient in food produced without large oil inputs, so we know it can be done. On the other hand the rich nations of the west have great advantages and great disadvantages in comparison to a still largely rural nation like Cuba.

Biofuels will not help. The best research available says it costs more than a litre of oil to produce a litre of ethanol, because our farming techniques are so oil dependent. This isn’t surprising really, considering that it takes more than one calorie of energy from fossil fuel for each calorie in the food we eat. The last year anyone looked at how much oil is in our food was 1974 when the ratio was one to one. It is now believed to be between four to one and ten to one. It’s quite possible to eat tomato paste from a plastic tube and have 52 transport stages involved in getting that one item to your table.

It’s not hard to see that broadacre farming of monoculture corn and wheat is a disaster. Modern farming techniques and modern diets are incredibly water inefficient. Global water use per capita has increased six-fold in the last hundred years due to affluence and changes in crop types and farming methods. Aquifers around the world are drying up as bores are drilled deeper and deeper. The soils are denuded of bacteria and minerals and become little more than an inert hydroponic growth medium, entirely dependent upon applied fertilisers.

Changing this will be labour intensive simply because different crops must be intermingled if pesticide use is to be decreased. Human wastes can no longer be wasted – they must be spread on the fields as they have been throughout history. New research shows that this is safe, by the way. Finally, our diets may need to change as well. Growing cows, sheep, and pigs is quite possible in a sustainable system, and chickens, ducks, and fish are a positive advantage – but it must be done in moderation simply because it’s terribly inefficient to grow grain to feed to animals. Rotating livestock onto fallow fields, using goats to clean up marginal areas, feeding scraps to pigs; all these methods are viable.

There’s something incredibly satisfying about traditional sustainable farming techniques. The earth smells rich and the balance and diversity of plants and animals invigorates the soul. Public opinion notwithstanding, sustainable organic techniques produce comparable yields to “conventional” farm practices, although they are more labour intensive. The claims of the biotech industry that their new seeds are the only way to feed the world are simply wrong. Quite apart from safety concerns, these crops are designed to make use of heavy fertiliser and pesticide regimes, and are difficult to grow except as monocultures. Companion planting and encouraging bird and insect diversity are in fact a far more successful approach, and have been refined to an artform applicable in every climate.

None of this can be done without some sacrifices. We have to get used to eating the crops which are suitable for the region and the season. We have to have a diet more balanced between meat and vegetables. We probably have to pay more for our food simply because more of us probably have to work at producing it.

The benefits are not just to the environment, however. There’s a psychological and psychic benefit to living sustainably. Knowing that our lives are founded on a living soil and an ecology enriched by our presence creates a mindset of peace and permanence in all aspects of our society. We are in great need of that influence at the moment, I think.

This entry was posted in environment, science. Bookmark the permalink.