It’s all about ratings. Fox has shown that you get more viewers if you shovel people back a half digested version of their own prejudices and bigotries, leavened with pique and outrage. We don’t care about facts or government, we just want someone to hate, right?

But surely we want to know what the weather is going to be like? Apparently not.

In the UK, the Daily Mail, the Express, and the Telegraph get their weather from a service called “Positive Weather Solutions”. The pictures of whose forecasters come from Russian mail order bride catalogs and other sources of tits on the internet. 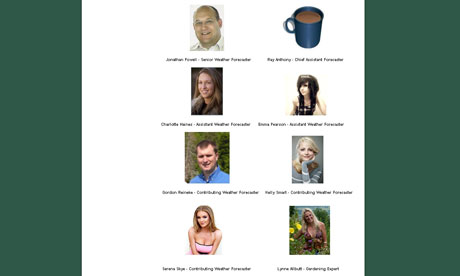 Not only are the forecasters not real, their forecasts aren’t either – predicting winter lasting until June and also 79F in Scotland’s spring heatwave. And lying about last week’s forecast to make it seem that they’d been right all along.

But it’s much more interesting than the truth, and that’s what counts, in la la land.

via: George Monbiot at the Guardian.

This entry was posted in humour, observations, society. Bookmark the permalink.