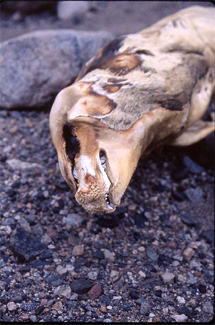 In a dry glacial valley, 1000m above sea level and 40 miles from the coast of Antarctica, a friend of mine was shown the mummified remains of a seal. The scientist from Davis base who had taken him there asked how old he thought it might be.

I don’t know, there’s no moisture or much bacteria, it could be old.

Why do you suppose it’s here?

Is it so old that this was the sea coast once?

No it’s a couple of thousand years old. This guy walked a long way from the sea up a mountain – he’s an outlier.

Variation in behaviour and variation in genetic makeup is good for the overall chances of survival of the genes which make up Crabeater seals. A single seal may be taking a risk, but occasionally that risk may pay off extremely well. All the many seals who took risks and didn’t make it have to hope their relatives carry their genes forward, but if some catastrophe overtakes those seals who tried safer, more ‘normal’ strategies, then it may be just the outliers who become the ancestors of all future Crabeater seals. You could say the seal up in the dry valley was spectacularly unsuccessful, but you could also say he took Crabeater seals to new heights and untried pastures.

Human societies enforce a certain level of conformity so as to function harmoniously. In the same way that a species must contain a range of genetic makeup to cope with changing conditions, a society must tolerate a level of difference to encompass a range of responses. By far the most successful model of this, provided its institutions are strong enough and fair enough to maintain cohesion, is the pluralistic society in which minority groups are allowed to continue their independent cultural traditions.

In the same way that culture is analogous with genetics, behaviour is analogous with politics. Castro and the Cuban strawberries is the example which comes to mind. He believed that Cuba could turn its economy around by growing strawberries, and instead the glut of enormous tasteless fruit nearly ruined it. In an autocratic state a single opinion is the only one which counts, and the state has a great deal less flexibility. Ideally a democracy would throw up a range of views. Solutions would be put forward from a broad base. A less regulated state would allow multiple approaches to the same problem to coexist. Bad sugar prices (Cuba again) would not be catastrophic, because not every field would contain the same crop.

Faced with external, environmental, and economic threats, society should be taking advantage of all its cultural and political resources. Instead there is an attempt to rally behind a single vision, adopt a unified approach. This is as much a mistake for the Islamic states of the middle east as it is for a rich and powerful nation like the United States. When everything else has failed, the seal who thought it would be a good idea to climb a mountain forty miles from anywhere sensible may be a saviour rather than a traitor.

This entry was posted in philosophy, science, society. Bookmark the permalink.