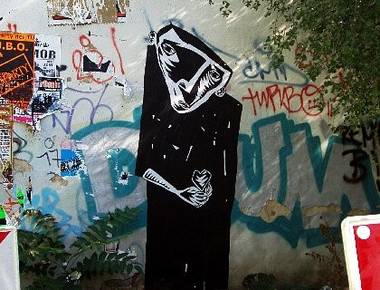 Half asleep this morning I was daydreaming about the psychological state of a Guantanamo inmate.

No real idea why my life had suddenly changed, nor even a clear memory of the Pakistani soldiers taking me from my bed. Memory has become a series of tangible fragments, each a smooth greenish white like the concrete lit by fluorescent lights which make up the five years of my one long day.

Small pieces of news reach us, and we examine them like priests pawing through entrails hoping for a sign the drought might break. The nomination of retired Vice Admiral John Michael “Mike” McConnell to be Director of National Intelligence is part of an effort by the Vice President to tighten the Administration’s grip on domestic intelligence and grease the wheels for a more aggressive stance towards Iran. Negroponte was willing to whitewash Honduran human rights abuses and work alongside William Casey channelling funds to the Contras under Reagan, but he baulked at the production of a National Intelligence Estimate which will support the case for an attack on Iran so he’s being replaced by someone more compliant.

It could be any amount of time, really. The occasional stony faced American interrogator tells me what he wants to hear and I try to make up some details which fit. The guards say nothing as they “walk” me around the yard each day, in the semi darkness of my hood.

This coincided with a rotation of Generals. On January 4 Bush ousted the top two commanders in the Middle East, Abizaid and Casey, who had opposed a military escalation in Iraq. Most Washington observers have treated BushÃ¢â‚¬â„¢s shake-up as either routine or part of his desire for a new team to handle his planned Ã¢â‚¬Å“surgeÃ¢â‚¬Â of U.S. troops in Iraq. But intelligence sources say the personnel changes also fit with a scenario for attacking IranÃ¢â‚¬â„¢s nuclear facilities and seeking violent regime change in Syria. All of which sounds like Nixon burning down Laos and Cambodia because he couldn’t make progress in Vietnam.

I weigh and touch each fragment of memory. They seem real, but I’m aware that many of them are things I’ve been told, or things I think they said to me. Did I really have a family?

As part of the unpopular but inevitable “Surge”, Kurdish troops will be brought into Baghdad, something seemingly calculated to add to the chaos. The Mahdi Army itself is a sworn enemy of the Kurdish Peshmerga militias and is currently spearheading resistance of Kurdish moves to annex the oil-rich city of Kirkuk to their autonomous region.

Did they take me to Egypt on that nighttime plane? I heard a guard speaking with an accent I didn’t recognise, but it was cold. People try to speak to me sometimes, but I no longer answer, and they no longer seem to care.

No one’s looking for calm, least of all the Israelis, who leaked and then denied plans for a nuclear strike on the Iranian enrichment programme. Never mind the tacit admission to possession of nukes, they’re willing to threaten to use them. It’s hard to judge how serious Israel is about this, especially since they’ve clearly been trying for some time to encourage Washington to consider using force against Iran. Would they go it alone? Do they now have Bush’s support? The goat’s sweetmeats aren’t talking.

There’s one memory everyone here shares. I think I saw it on a black and white television in a market. No one knows if it was real though, like the man landing on the moon. Still it’s something to hold onto, something to touch.

I wonder if I’ll wake up, one day. None of it seems real, or even possible. Were the news reports scripted by Kafka? Aren’t half a million dead Iraqis enough? Can the warmongers really not be stopped? I remember living in the land of the free. That memory is smooth and hard and real.

This entry was posted in world. Bookmark the permalink.